Experts of the Centre for Global Studies Strategy XXI in their article for the Polish portal Energetyka24 describe the military aspects of Nord Streams pipelines usage. Russia has been actively building its naval capabilities over the past decade. This also applies to the smallest of its four fleets – the Baltic one. But despite some increase in military capabilities, it is significantly losing to NATO navies in the region. Russia is constantly trying to find non-standard and not entirely clear to the West ways to compensate for the advantages of the Alliance's military potential in the Baltic. The Nord Stream and Nord Stream 2 gas pipelines contain additional hidden advantages for such compensation.

The use of the more than 1,200-kilometer Nord Stream corridor to explore and monitor the maritime space in almost the entire Baltic Sea area provides certain operational advantages. This allows more effective use of existing ships in countering NATO forces at sea, to detect in advance the covert deployment of NATO’s surface forces and submarines from bases to firing positions or patrols areas.

Technically, it is easy to implement the program of creating underwater advantages for the Baltic fleet and it will not require significant resources.

Using the Delta-MGA's standard gas engineering system specifically designed for Gazprom, the Russian military men only need to add some technical components. Further, they can secretly carry out work to install underwater sonar stations (SS) in the right places, including in territorial waters of coastal countries.

Given the shallow depths of the Baltic Sea and the short distances from the corridor of both Nord Streams to the coasts of neighbouring countries and the critical Åland Islands, Gotland and Bornholm, Russia can deploy a passive underwater surveillance system in a relatively short period of time at the base of several lines of the MGK-608 ‘North’ passive sonar complex.

The system of underwater surveillance should be considered as a Baltic military component of the global surveillance system, created by the Russian MoD under the official name "Unified State System for Surface and Underwater Lighting (USSSUL) HARMONY". It is based on special submarine robotic complexes that come out of the submarine and deploy sonar stations on the bottom. The robots transmit received data to the command control point via satellites. This system can detect all ships, submarines and even low-flying aircraft and helicopters.

Fig. 1. Option of deployment for the chain of the MGK-608 receivers on the seabed.

The modern underwater surveillance system can detect ships and silent-running submarines in areas up to 1000 km, at a distance of up to 200 km from the coast and depths up to 1000 m, in zones within an area of 30-300 thousand square km simultaneously.

The range of target detection by a single station is up to 150 km. The MGK-608 is designed for uninterrupted operation of 10 years without lifting the bottom part. Thus, we can imagine that the system of underwater espionage in the Baltic Sea may look like this: 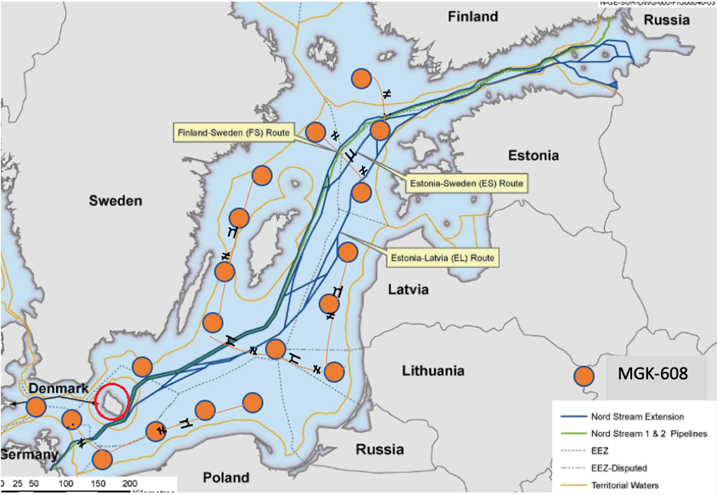 Fig.2. Option of deployment for the network of the passive sonar surveillance system based on the MGK-608

The MGK-608 stations could be installed easily on both sides of the Nord Stream corridor, mainly outside the territorial waters. It is possible to connect the stations in chains and deploy them within a permanent coverage of detection zones of each other - up to 150 km.

This system of passive underwater surveillance would allow Russia to take control of underwater military and non-military activities, the main Baltic islands, and civilian shipping routes. It should be noted that in Russia's arsenal there are many different types of sonar stations but conducting sonar surveillance in the Baltic Sea requires relatively simple samples, although its hydrology has particularities.

Concealed installation of the MGK-608 stations is probably carried out by the Main Directorate of Deep-Sea Research of the Russian MoD (here and after MDDSR). This is the military unit No. 45707, one of the most classified in Russia, which engages in planning and conducting of special underwater operations. The installation of sonar stations is carried out by hydrographic vessels of the Yantar type (Project 22010 Kruys) or autonomous underwater vehicles.

The obtained sonar data can be used by special units of the Russian Navy to establish control, as well as damage, if necessary, of the submarine power cables, fiber-optic cables, pipelines and other underwater objects of NATO and EU countries. The latest example is the sudden disappearance in August 2019 in Eckernförde Bay of the large Boknis Eck monitoring station of the German Ocean Research Center GEOMAR, which was used to collect important scientific data in the Baltic Sea. Only the severed communication cable remained at the station’s installation site.

Given that the Nord Streams route crosses most of the submarine fiber-optic cables, they are easily accessible for fiber tapping and / or sabotage. The MDDSR units are able to do this. The MDDSR hydronauts are engaged in reconnaissance activities – wiretap of communication cables, installing motion sensors, work out scenarios of sabotage on underwater communications of NATO and EU countries.

Special operations are greatly facilitated by the proximity of the Nord Stream to their areas and ability to justify the Russian presence through the existence of two long pipeline systems, which smooth operation requires technical supervision.

A priori, it is believed that gas and gas transmission systems may be under a threat of external origin (natural, man-made, terrorist), but they themselves cannot generate any military threat to third parties. The latter is not true, as Russia has created and improved hybrid warfare technologies, using non-military infrastructure to create hidden advantages. This has already been confirmed in the Black Sea, and therefore can be used as a template by Russia in the Baltics.

Therefore, the demand of the US Congress to stop the completion of Nord Stream 2 is a move in the right direction, i.e., not to allow Russia to increase its control over the Baltic operational zone, as it has already achieved to a large extent in the Black Sea.