Not terminated, not dismantled, the Nord Stream 2 project is officially on hold, and some in Germany are still hoping to use this bloodstained pipe in the future, writes Mykhailo Gonchar for EuroActive. Ukraine’s Mykhailo Gonchar is the chief editor of the Black Sea Security Journal and president of The Centre for Global Studies “Strategy XXI”.

Germany is the best country in the world for the fifth year running – is a headline from last November that stuck with me. How could a nation achieve such miraculous transformation, from a complete ruin to Europe’s economic powerhouse, from moral bankruptcy to a paragon of freedom, democracy, and virtue? In three words, my answer is – The Nuremberg Trials. Germany faced its past, accepted its responsibility, and found salvation.

The war guilt in the German political and civic discourse is like gravity, ever-present. And, regrettably, stealthily, it was instrumentalised by the Kremlin in such a sinister way that we now need a new trial to reckon with the bloodstained legacy of Nord Stream 2 – Germany’s worst mistake of this century.

Some German politicians are beginning to accept responsibility for the disastrous energy policies. And the German People must learn how the intrinsic signalling that came along with the continued failure by Angela Merkel’s government to terminate Nord Stream 2 was perversely interpreted by Putin as a green light to attack Ukraine.

What happened? It’s important to get the context right before seeing how Moscow read the inadvertent signals Berlin was telegraphing.

Ostpolitik became the dominant political theory in post-reunification Germany because it worked flawlessly to bring two parts of the country together. So this doctrine was cheerfully pointed Eastward with almost blind faith that it would work a comparable miracle on the Russians. Timothy Snyder termed it politics of inevitability, where peace and security are taken for granted as long as trade turnover grows.

In this flawed framing, the Nord Stream 1, then Turk Stream, then Nord Stream 2 were not just economic projects, but they were pure and beautiful doves of peace that Ukraine, of all countries, should’ve welcomed. Just how wrong and how damaging this distorted narrative was is now clear to everyone who is willing to face the facts.

With the pipelines of death, the Kremlin had two objectives: to squeeze Ukraine out of the gas transit and cement Gazprom’s hold over European gas markets – controlling transit routes and the commodity. This was never about commerce. As long as Russia depended on Ukraine for gas transit, Putin’s hands were tied, and he couldn’t wage his war. When Nord Stream 1 was launched in 2011, transit via Ukraine was cut. Turk Stream started flowing gas to Europe in 2020. The same story repeated itself. 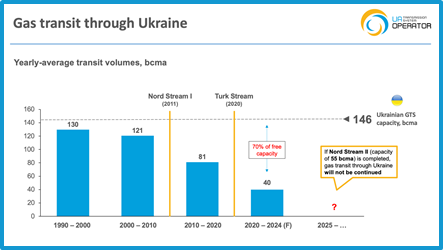 It is true that until 2014, the Ukrainian gas market, deliberately corrupted by Russia, was opaque and dysfunctional. So Germany could credibly justify its acquiescence to Putin’s Streams. But as Matthew Karnitschnig wrote for Politico, “the 2015 decision to green-light the Nord Stream 2 pipeline despite Russia’s annexation of Crimea […] didn’t just open the door for Putin to go further, it effectively encouraged him to do so.”

Ukraine completely reformed its energy market in the first five years of the post-Yanukovych period (2014-2019), meeting the EU’s every demand. Germany continued to back Putin’s pet project even though the existing transit network exceeded Germany’s needs for gas imports. In 2020-2021 it was apparent to every objective observer that Nord Stream 2 (capacity of 55 bcma) was not needed because Ukraine’s transit network, through which gas to Germany was supplied for decades, had a spare capacity of roughly twice as much (100 bcma). Ukraine’s pleas to terminate the bypassing routes were unceremoniously dismissed.

American officials explained that the continuity of Russian transit via Ukraine is a principal deterrent. If Germany takes it away, the national security architecture on the European continent will collapse. Germany either didn’t understand or refused to consider those arguments. Instead, its diplomats laughed at the “warmongering” Americans.

Putin’s reasoning is beyond comprehension, but if we acknowledge what has unfolded since Crimea and zoom in on the last 24 months of the Nord Stream 2 saga, we could say, without exaggeration, that the Merkel government’s failure to shut down the death-pipe egged Putin on towards the big war.

The Kremlin knew that Germany knew his ultimate goal: to squeeze Ukraine out of gas transit. Yet, Germany’s political leaders were willing to partake in the naked hypocrisy – calling it a “commercial deal.”

At the Munich Security Conference in 2007, Putin declared his demand for a sphere of influence, and since then, thousands of Ukrainians have died – victims of the Kremlin’s belligerence. In that context, Putin saw Germany’s willingness to embrace Nord Stream 2 –  dismantling Ukraine’s insurance policy against Russian escalation – as a nod and a wink.

Sitting isolated in his Kremlin office for two years, his delusions brewing, Putin thought: Angela Merkel understands what I’m trying to achieve. She respects my right to lord over the “near abroad.” Germany is even willing to antagonise its neighbours – Poland, Baltic States, etc. – to do our bidding within the EU. Furthermore, the German public appears to be easily manipulated: The US advises you against my pipeline. Maybe we should call it – an American attempt to infringe on German sovereignty. Perhaps, I should use my propaganda channels and pocket experts to amplify this lie.

But before I start the bloodbath, let me double-check one last time. Putin might have thought to himself when he published his lengthy, nonsensical essay in July last year – a manifesto justifying his ambition to absorb Ukraine. Putin dialled up the rhetoric to eleven: “Ukraine’s true sovereignty is possible only in partnership with Russia.” And announced his intentions in the clearest way that he knew.

How will Germany react? Just a commercial project, still? No matter what I do, the voice in Putin’s head whispered, Germany has my back, their support for the pipeline of war, the pipeline of Ukraine’s isolation, tells me so. In May of 2021, when Joe Biden waved the sanctions as a gesture of goodwill towards Germany, Putin concluded, we have a tacit understanding. No one minds that I take Ukraine.

This is the hard truth that no one wants to hear. There is an overwhelming desire to sweep this under the carpet and celebrate the “difficult and courageous” decision the German government took when it finally shelved Nord Stream 2. Not terminated, not dismantled, the project is officially on hold.

Some in Germany are still hoping to use this bloodstained pipe in the future.

When speaking to the Bundestag, President Zelenskyy put it plainly: “When we told you that Nord Stream was a weapon and a preparation for a great war,” you refused to hear us. Please don’t bury your head in the sand again. To find salvation, we have to reckon with the truth first.

Remember when the German Foreign Minister and his team laughed at the US in the UN for stating that Germany was endangering European security by continuing on the path of increased energy dependence on Russia?

Remember when they said Nord Stream 2 was solely an economic project? pic.twitter.com/xMXSttuugT